This month was a perfect example of how being flexible and traveling slow can keep costs down. As such this trip continues to be a nice change of pace from most of our European travels. I feel like maybe we’ve learned a few things and it’s paying off in big ways for us, both in terms of lower costs as well as higher levels of comfort and joy.  With costs like these, we could live in Europe long term.

More details on what we loved about Ronda, and I mean really loved, will be coming soon in other posts but true to my promise here is another installment in the “How much does it cost to live as a digital nomad couple” series, where I try to stay focused on what it costs us to live this digital nomad lifestyle.

You can read more about what goes into this series, including some important background notes about what the numbers below do and do not include in this post:  Actual Costs of Living as a Full-time Digital Nomad Couple. One of the many reasons to travel slow and too plan things one month at a time is that some Airbnb’s have hefty discounts on longer term stays typically for a week and/or a month.

We also stay relatively fluid and unattached to specific destinations or date because that too lets us pick and choose what is more affordable and take advantage of sweet deals.

July was a perfect example of both of those.

First, we abandoned our plans to spend a month in the north of Spain because we could not find a house that met our basic needs and budget. Airbnb inventory was so sparse that I started looking on a bunch of other vacation rental platforms. We still came up empty for the areas we wanted to go in the north of Spain.

However, Elena had stumbled across a home in Ronda that looked amazing in every way, except it had no internet. Wait, what the what, it’s 2017 right _everywhere_ has internet?!? Elena sent a quick message to the owner asking if he could get internet hooked up and thankfully he said he could. Woot! Suddenly our plans changed and solidified, we were going to Ronda.

That Airbnb that normally goes for $95-102/night by the way had a 56% discount for a full month. That brought our total for 30 days to a very reasonable $1491. That happens to work out to exactly our $50/night target for lodging!

Gratuitous Airbnb plugs:
If you’ve never used Airbnb before you can signup with here and save $40.
If you’d like to read more about using Airbnb you can read our posts on living in Airbnb here.

We did take a weekend trip from Ronda to Marbella and stayed for one night at the The Westin La Quinta Golf Resort & Spa in Marbella, which is normally €300/night. As nice as the pool was, that would have hurt the wallet. I used 10,000 Starwood points for a free one night stay. Use those points wisely ;) Affordable restaurant food has long seemed difficult to find in Europe, but we feel we really scored a huge gastronomical jackpot in Ronda.

With a month planned for Ronda we expected to buy some groceries and eat at home quite a bit to keep costs down. In practice however we really didn’t. We made a few cheese sandwiches and salads at home, drank a couple bottles of wine at home, but that as about it. I don’t think we “cooked” food once even though we had a range and microwave.

The main reasons for not cooking was having found a pair of restaurants nearby that were both delicious and affordable. Most mornings we’d walk up to a nearby cafe, Meson Coto Alto, where we’d split a full portion of an delicious thick tortilla española for breakfast along with coffees and come away having spent less than €20. Then many evenings we’d walk 50m from our front door to a casual restaurant, Gastrobar Deja Vu, which was so amazing I’m going to write an entire post about it. High quality food, beautiful presentation, great service, and dinner for two with a glass of wine would regularly come out between €20-25. Needless to say, this was not out transportation in Ronda, but down in Puerto Banús/Marbella apparently these vehicles are preferred to walking…

Ronda is small enough you can walk from one end to the other in less than 25 minutes. That meant we didn’t need any local transport in Ronda beyond our feet.

We would have taken a taxi from the train station to our Airbnb just because of the distance, heat and bags, but our gracious Airbnb host gave us a ride both directions!

For a long term stay it would have been nice on days we went grocery shopping, or wanted to head out of town, to have some form of transport.  I thought a motorbike would be a lot of fun, but most days it’d have just been parked collecting dust. We did look into renting a car for a day or two, and it would have around €50/day but we never did get around to it as there was so much to do within walking distance.

The exception is we did take a weekend trip to Marbella and bought round trip bus tickets from Ronda to Marbella (€10/each/each for the weekend excursion. While we were in Marbella we did take a couple taxis, (€6-10 each ride) but also used the free hotel shuttle. This is a tricky number to estimate this month because we went to a LOT of local concerts, but tickets for them was cash only. Our Airbnb host tipped us off to a concert series, Ronda Music Week, the week arrived and it was AMAZING (again more on that soon but do listen to the video above).

3 Ronda music week concerts, €10/ticket, One piano concert the week after, also €10/ticket. We also took a small (8 person) walking tour of the entire old town area including admission to the Arab Baths and Palacio Mondragon which was €15/ea.

We also went to a free (entrance) wine/social mixer at a vineyard called Samsara that was organized by a slow travel organization called Entrelinguas. I _wish_ we’d discovered sooner and we’d have done so much more with them. The whole night cost €16 between the food (€10) and the bottle of wine (€6) we bought there.

Out time in Ronda was a shining example of finding out what’s going on locally after you get there and doing that. It often is more rewarding and costs way less than doing whatever the top rated tourist attraction listed on TripAdvisor is. Ronda has so much natural beauty though you don’t need to look for it, you just walk around the narrow streets and it slaps you in the face around every corner.

Cash on other things: $4/day

As usual, we don’t spend much cash, and I’ve subtracted out the cash we used for entertainment above. That left a little over €100 that got spent here and there on things. About half of that cash was spent on food from the convenience market down the street. The rest was spent at restaurants when they won’t take a credit card for less €10. 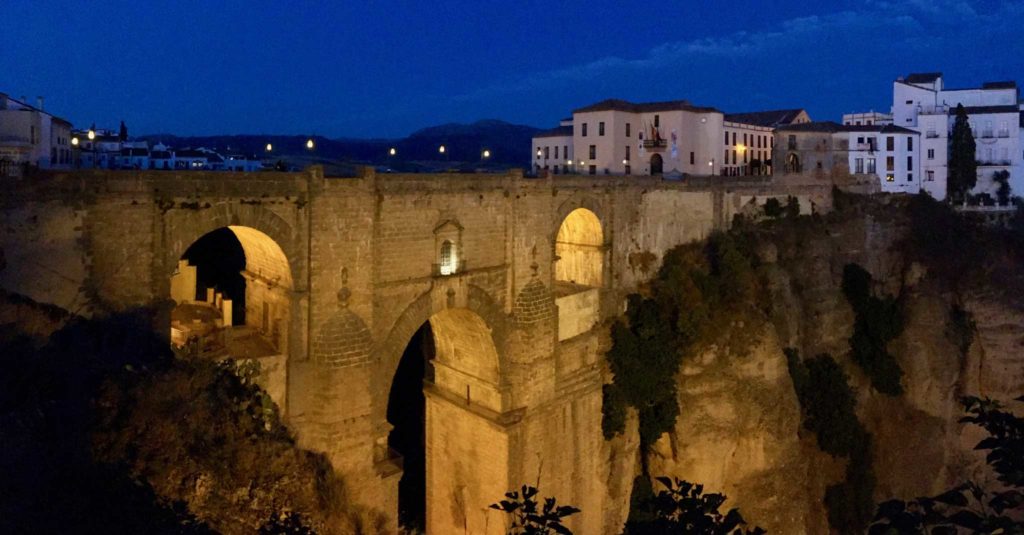 Yup, so that Europe on $50/day in 2017. Crazy right? That’s why we’re already planning on coming back to Ronda, Spain.

Questions or Comments, please ask below!